Russell James stops by to answer some questions about his newest novel, Dreamwalker, and other things. I've been a fan of his since I read his first published novel, Dark Inspiration. He really knows how to scare, and Dreamwalker is some of his best and most frightening work yet.

Let’s get right to it. How did Dreamwalker come about?

The main character, Pete Holm, has very vivid dreams, ones with continuing storylines. I dream like that. While I’m in a dream, I can remember previous dreams from that imaginary place. I wondered what it would be like if that wasn’t an imaginary place, but an alternate reality, running in parallel with the real world. That kicked off ideas about Dreamwalker.

Did you do a lot of research on dreams? On Haitian customs and lore?

I did a lot of research on Haitian customs and voodoo. Nothing tests the bonds of trust in a marriage like coming home to see your spouse reading books on voodoo. That stuff is seriously creepy. A lot of people swear to the power voodoo possesses. It is apparently enough of a worry that it was legally banned in the 1950s in Haiti. That says something. I mean, I think Ouija boards are scary, but they haven’t been made illegal.

I’ve spent several week in the Dominican Republic, which shares the island with Haiti, so all the location atmosphere for Prosperidad’s early years there came from my experiences.

What’s your writing process like? And how long does it usually take you to complete a novel?

I’m a serious pantser when it comes to writing. Outlines are for research papers. The plus side to being an outliner is that those people can write a lot faster than I do. I’m lucky to get one novel a year out the door.

It’s kind of obvious that you like to write horror. Have you written anything other than horror? If not, do you plan on writing in some other genre? Western? Sci fi? Romance?

I’ve written in a few other genres. I have one Supernatural/Romance short story called Island Girl with Gypsy Shadow Press. Most of my other work is in Sci-Fi. I’m in several benefit anthologies with my critique group. Out of Time and Still Out of Time are collections of time travel stories. Centauri Station and my solo Outer Rim collections are space travel-themed. The last three are new. Out of Time was a top anthology seller with Amazon right out the door. All the royalties from the group collections go to Doctors Without Borders and we’ve sent them thousands of dollars last year. That is a good feeling.

Out in left field, I finished a historical novel about the life of John the Baptist. I’ll publish that under the pseudo-pseudonym R.R. James. Kind of like hiding in plain sight, but setting it apart from the horror-genre stuff. The royalties from that will also be donated.

What made you write your first novel?

On long car trips, I would tell my wife stories that I’d thought up, or what I thought might be more interesting plot twists for movies or TV shows we’d seen. She told me I should write them down and get them published. I told her that was ridiculous, that no one would want to read something I’d written. She gave me a Gotham online writing class for Christmas that year, and from that moment on, all my free time disappeared.

Who are some authors whose work you enjoy reading?

There’s this guy named Bernstein, don’t know if you’ve heard of him? He wrote a story called Apartment 7C that had this masterfully horrific ending. Other folks I’ve read and loved lately have been Catherine Cavendish’s Saving Grace Devine, JG Faherty’s  Legacy, and Hunter Shea’s new Island of the Forbidden.

Any horror writer who doesn’t say Stephen King is lying. Poe is great for his language construction and what, for the time, were groundbreaking horrific ideas. I also like Harlan Coben for his stellar dialogue. 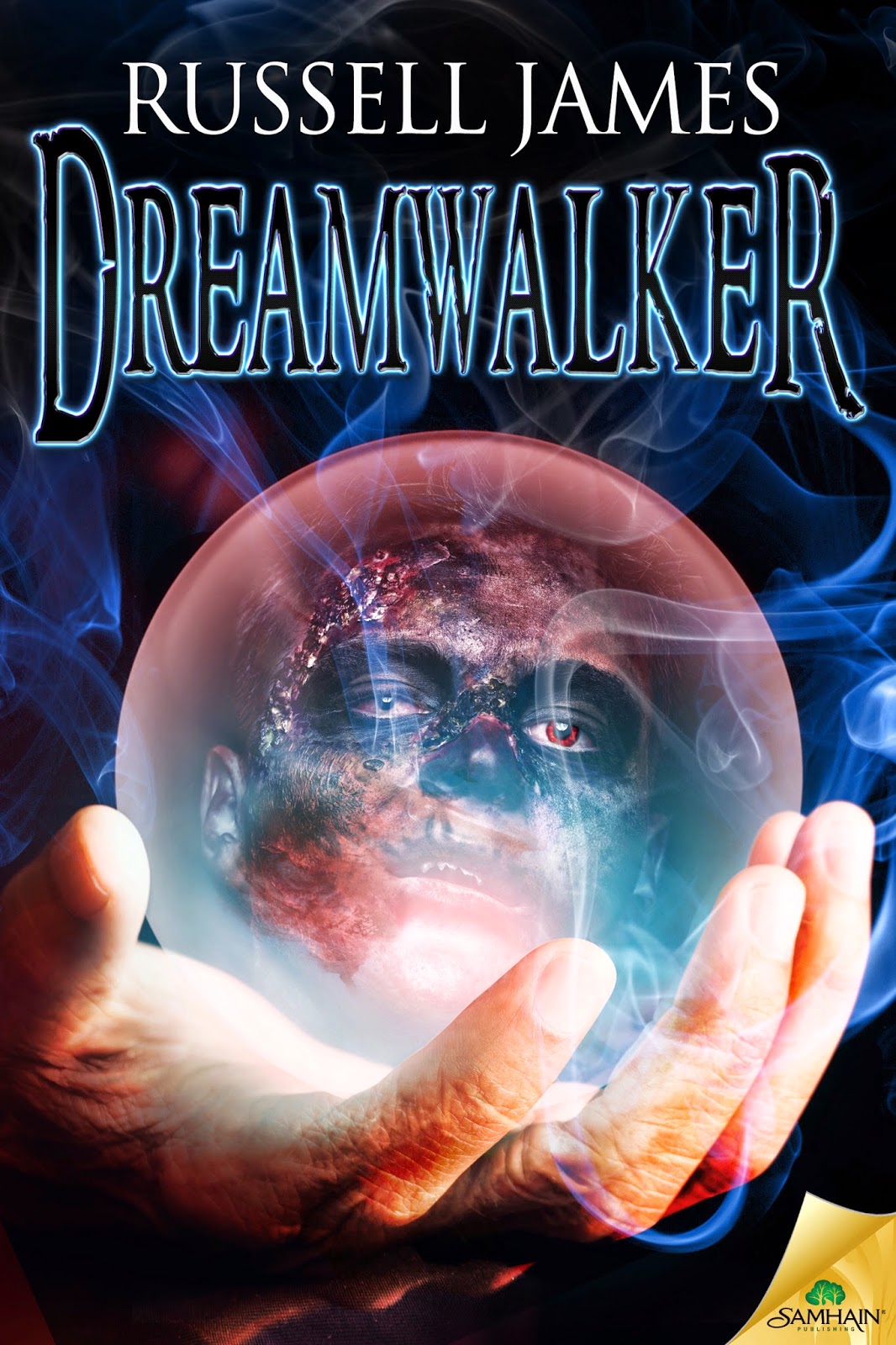 Dreamwalker is the sixth novel that Russell James has published with Samhain Horror under legendary horror editor Don D’Auria!
Dreamwalker Synopsis
Two realities. One hope.
What if you lived in two worlds, and could die in either?  Pete Holm can. He is a dreamwalker, able to travel to the realm of dreams, including the devastated world of Twin Moon City, where an evil voodoo spirit holds living souls in terror with his army of the walking dead.
In the waking world, drug lord Jean St. Croix knows only the power of the dreamwalker can stop him, so St. Croix vows Pete must die.
Pete is the only hope to rescue the lost souls in Twin Moon City…unless St. Croix kills him first. Can anyone survive when two realities collide?
Purchase Links
GoodReads:
http://www.goodreads.com/book/show/23563310-dreamwalker
Amazon:
http://www.amazon.com/Dreamwalker-Russell-James-ebook/dp/B00P15GV98
Samhain Horror:
https://www.samhainpublishing.com/book/5295/dreamwalker
Barnes and Noble:
http://www.barnesandnoble.com/w/dreamwalker-russell-james/1120666682?ean=9781619227682

Giveaways
1)      Open reviewer giveaway: Anyone who reviews Dreamwalker on Amazon and one other site like GoodReads, etc. and sends Erin Al-Mehairi, publicist, their links to hookofabook@hotmail.com will be entered to win a $20 Amazon gift card. This contest ends on Feb. 28, 2015.

2)      Rafflecoper giveaway for two copies of Russell’s previous books. Two winners will each win one of two books, Black Magic and Dark Inspiration. US only, no international shipping. Must use a valid email that you can be reached by. By entering the giveaway, you consent to allow Russell to have your email for very infrequent newsletter updates. Contest ends Feb. 28, 2015. Other contest questions can be referred to Erin Al-Mehairi, publicist, Hook of a Book Media at hookofabook@hotmail.com.

(Five Stars, A Night Owl Top Pick) “I loved the story so much that I’m eagerly waiting to read more from him. He carefully and very intricately wove his storyline to have elements of mystery and suspense throughout. I now have a new favorite book I’ll read over and over again.”
—Night Owl Reviews on Dark Inspiration

“The book had me at the edge of my seat. The writing is so vivid I even jumped a few times. If you're a fan of the genre, love ghosts and are drawn to the supernatural, then do yourself a favor and pick up a copy of this book!”
—Long and Short Reviews on Dark Inspiration 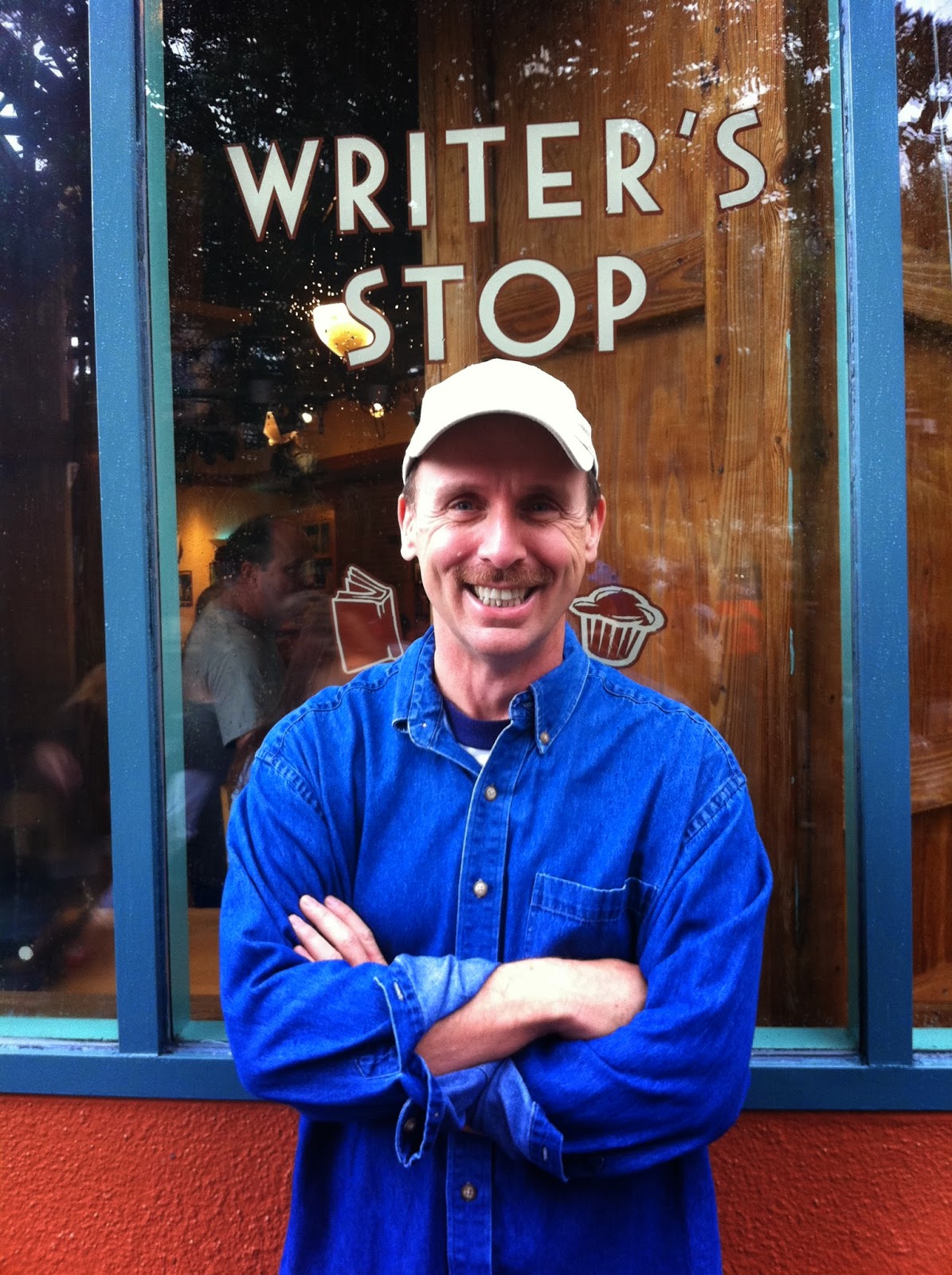 Russell James grew up on Long Island, New York and spent too much time watching Chiller, Kolchak: The Night Stalker, and The Twilight Zone, despite his parents' warnings. Bookshelves full of Stephen King and Edgar Allan Poe didn't make things better. He graduated from Cornell University and the University of Central Florida.
After a tour flying helicopters with the U.S. Army, he now spins twisted tales best read in daylight. He has written the paranormal thrillers Dark Inspiration, Sacrifice, Black Magic, Dark Vengeance, and Dreamwalker. He has two horror short story collections, Tales from Beyond and Deeper into Darkness. His next novel, Q Island, releases in 2015.
His wife reads what he writes, rolls her eyes, and says "There is something seriously wrong with you."

Visit his website at www.russellrjames.com and read some free short stories.

He and his wife share their home in sunny Florida with two cats.

Posted by David Bernstein at 8:54 PM