Get Your Weird West On

You know, Hell Hole is more than just a Spinal Tap song (though it is a damned good one). It could be the well where you’re ordered to put the lotion in the basket. Or the little spelunking adventure in The Descent. Your office could be your own personal Hell Hole, even if it’s not in an actual hole.

Now, for me, I wanted to create a vision of hell on earth that was unlike any other. But at the same time, as I was starting to write my latest book, I was back into one of my original passions – westerns. I once watched a restored version of The Good, The Bad and The Ugly with Eli Wallach. Not sure if I can top that, unless Clint invites me to his house to watch Unforgiven on his enormous TV.

So, what does a writer do when he has two passions colliding? He combines them, of course. I think it’s safe to say every book is strewn with its author’s likes, dislikes, personality and dreams. With Hell Hole, I was able to explore the old west at the turn of the century, with bold characters who epitomized what it was to be a tough guy and a stalwart explorer. Of course, I did have to put them to the test, attempting to kill them with fright or physically. And if ghosts and strange beasts couldn’t do it, I’d have to turn to a higher (or lower) power.

Weird West fiction has made a bit of a comeback this year at Samhain, with Hell Hole, Jonathan Janz’s Dust Devils and Eric Red’s The Guns of Santa Sangre. Why? I think we’re all wishing for the return of men and women with integrity and grit. And if you’re searching for something to read on the Samhain Horror page, you want a good old scare, too. There are plenty of scares to go around at Samhain. Just read anything by my gracious host, David Bernstein. This guy is the goods!

And if you’re looking for something different, try a Weird West book. You’ll never look at cowboys and Indians the same way again. 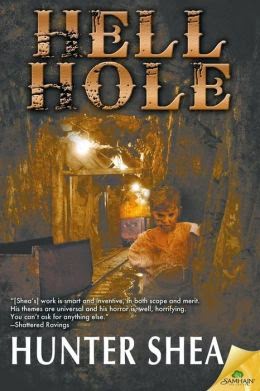 Deep in a Wyoming mine, hell awaits.

Former cattle driver, Rough Rider and current New York City cop Nat Blackburn is given an offer he can’t refuse by President Teddy Roosevelt. Tales of gold in the abandoned mining town of Hecla, in the Deep Rock Hills, abound. The only problem–those who go seeking their fortune never return.

Along with his constant companion, Teta, a hired gun with a thirst for adventure, Nat travels to a barren land where even animals dare not tread. But the remnants of Hecla are far from empty. Black-eyed children, strange lights and ferocious wild men venture from the deep, dark mine...as well as a force so sinister Nat’s and Teta’s very souls are in jeopardy.
There’s a mystery in Hecla thousands of years old. Solving it could spell the end of the world.

Forest of Shadows
"A frightening, gripping story that left me too frightened to sleep with the lights off. This novel scared the hell out of me and it is definitely a creepy ghost story I won't soon forget." --Night Owl Reviews

Sinister Entity
"This is the real deal. The fear is palpable. Horror novels don't get much better than this." --Literal Remains
". . .Culminates in a climactic showdown between human and spirit that keeps you glued to the pages!" --Horror Novel Reviews

Evil Eternal
"Hunter Shea has crafted another knockout. At turns epic and intimate, both savage and elegant. . .a harrowing, blood-soaked nightmare." --Jonathan Janz, author of The Sorrows

Swamp Monster Massacre
"If you're craving an old-school creature-feature that has excessive gore. . .B-horror movie fans rejoice, Hunter Shea is here to bring you the ultimate tale of terror!" --Horror Novel Reviews Hunter Shea is the author of paranormal and horror novels Forest of Shadows, Swamp Monster Massacre, Evil Eternal, Sinister Entity, which are all published by Samhain Horror.  HellHole came out in August 2014 and is his first western horror. His next Samhain novel, Island of the Forbidden, publishes January 2015.

The June 3, 2014 release of his horrifying thriller Montauk Monster was published by Kensington/Pinnacle.  He’s working on a second novel to come through them.

He has also written a short story to be read prior to Sinister Entity, called The Graveyard Speaks (it’s free, go download!), and a book of stories called Asylum Scrawls. His next book from Samhain Horror, titled HellHole, is set to come out in August 2014 and is his first western horror.

His work has appeared in numerous magazines, including Dark Moon Digest, Morpheus Tales, and the upcoming anthology, Shocklines : Fresh Voices in Terror. His obsession with all things horrific has led him to real life exploration of the paranormal, interviews with exorcists, and other things that would keep most people awake with the lights on.

He is also half of the two men show, Monster Men, which is a video podcast that takes a fun look at the world of horror. You can read about his latest travails and communicate with him at www.huntershea.com, on Twitter @HunterShea1, Facebook fan page at Hunter Shea or the Monster Men 13 channel on YouTube.

Posted by David Bernstein at 9:37 PM