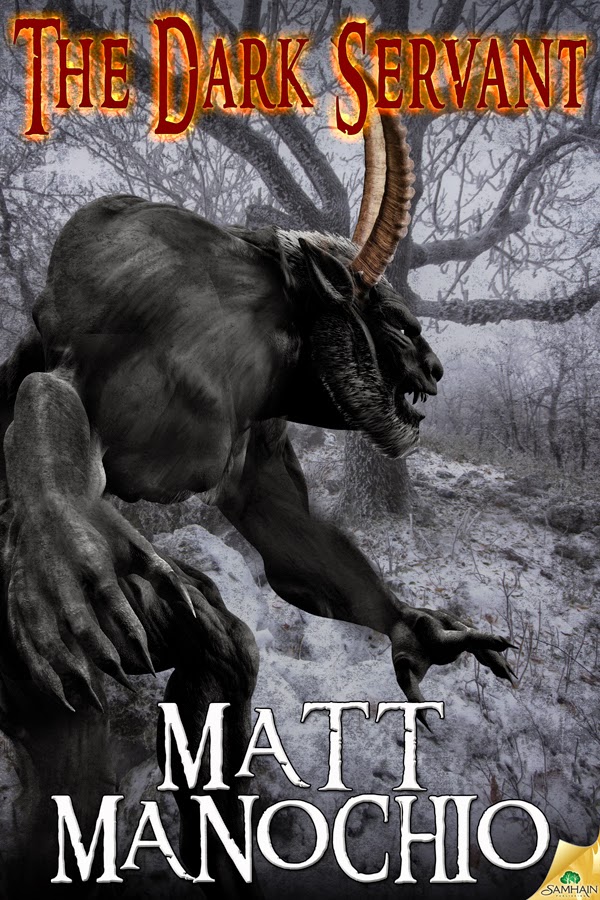 
Sometimes original ideas can be thousands of years old. And right under our noses.


I realized that in December 2012 when my boss asked me if I’d ever heard of Krampus—the subject of my debut novel, The Dark Servant (Samhain Publishing). I hadn’t. (Apparently he’d just discovered him, too.) He showed me www.krampus.com and something clicked. I wasn’t looking to write a novel, but when I read about Saint Nicholas’s dark other half—Krampus, a chain-wielding devil who kidnaps bad children and punishes them into repentance—I knew I had to write something.


What amazed me the most was that I’d never heard of him up until that point in my life.


I was 37 years old and thought I was reasonably in tune with odd, obscure things. As a kid, I read numerous books about the Loch Ness Monster. I once believed werewolves were real and refused to go outside to the mailbox on the night of a full moon if someone forgot to get the mail. I collected Monster in My Pocket toys and knew about the Wendigo, Ymir, and Catoblepas, to name a few. And who didn’t love Greek mythology as a kid when learning about the Minotaur, Medusa, and Charon? And I can identify just about every creature in Jabba the Hutt’s palace in Return of the Jedi. (That really doesn’t compare to human mythology, but I like throwing it in there.)


Somehow, Krampus, a European legend that dates back to the time before Christ, slipped through the cracks.


Was I the only one? We all know about vampires, werewolves and zombies. Fiction is littered with them. But not Krampus. I checked Amazon and B&N and found one commercially published book and a few self-published offerings. And that was it. My first decision was to not read any of them—and not because I thought they would be bad. I simply didn’t want any other writer’s vision of Krampus affecting my own.


Whether I do the monster justice? That’s up to others to decide. I’ve never had more fun writing anything in my life, though. And in researching Krampus, I learned there are other European variations of the myth, such as a Frau Perchta, Knecht Ruprecht and Belsnickel (I’d heard of Belsnickel due to Dwight portraying him on The Office, but didn’t associate it with Krampus).


One of the things that delights me is searching “Krampus” on Twitter and finding scores of Americans who have no idea what he is. It makes sense. I mean, do people in Belgium spend much time thinking about Bigfoot? America, I believe, will become more familiar with Krampus in the years to come. Filmmaker Kevin Smith is working on a movie featuring Krampus vignettes, and I know there are a few other Krampus flicks that have either been completed or that are slated to be filmed. There’s a comic book, too, and Krampus has been portrayed on television shows like Fox’s American Dad and NBC’s Grimm.


If I can be one of the people contributing to Americans learning a little bit about Krampus, and hopefully entertaining them at the same time, then great. Perhaps it will inspire others to seek out the exciting and new—while dusting off the history books to learn about it.

About Krampus:
December 5 is Krampus Nacht — Night of the Krampus, a horned, cloven-hoofed monster who in pre-Christian European cultures serves as the dark companion to Saint Nicholas, America’s Santa Claus. Saint Nicholas rewards good children and leaves bad ones to Krampus, who kidnaps and tortures kids unless they repent.

Santa's not the only one coming to town ...

It's older than Christ and has tormented European children for centuries. Now America faces its wrath. Unsuspecting kids vanish as a blizzard crushes New Jersey. All that remains are signs of destruction—and bloody hoof prints stomped in snow. Seventeen-year-old Billy Schweitzer awakes December 5 feeling depressed. Already feuding with his police chief father and golden boy older brother, Billy's devastated when his dream girl rejects him. When an unrelenting creature infiltrates his town, imperiling his family and friends, Billy must overcome his own demons to understand why his supposedly innocent high school peers have been snatched, and how to rescue them from a famous saint's ruthless companion—that cannot be stopped.

“Beautifully crafted and expertly plotted, Matt Manochio’s The Dark Servant has taken an esoteric fairy tale from before Christ and sets it in the modern world of media-saturated teenagers—creating a clockwork mechanism of terror that blends Freddy Krueger with the Brothers Grimm! Highly recommended!”
— Jay Bonansinga, New York Times bestselling author of The Walking Dead: The Fall of the Governor

“Matt Manochio is a writer who’ll be thrilling us for many books to come.”
— Jim DeFelice, New York Times bestselling co-author of American Sniper

“Matt Manochio has taken a very rare fairytale and turned it into a real page-turner. Matt has constructed a very real and believable force in Krampus and has given it a real journalistic twist, and he has gained a fan in me!”
— David L. Golemon, New York Times bestselling author of the Event Group Series

"I scarcely know where to begin. Is this a twisted parental fantasy of reforming recalcitrant children? Is it Fast Times at Ridgemont High meets Nightmare on Elm Street? Is it a complex revision of the Medieval morality play? In The Dark Servant, Matt Manochio has taken the tantalizing roots of Middle Europe’s folklore and crafted a completely genuine modern American horror story. This is a winter’s tale, yes, but it is also a genuinely new one for our modern times. I fell for this story right away. Matt Manochio is a natural born storyteller.”
— Joe McKinney, Bram Stoker Award-winning author of The Savage Dead and Dog Days

“Just in time for the season of Good Will Toward Men, Matt Manochio’s debut delivers a fresh dose of Holiday Horror, breathing literary life into an overlooked figure of legend ready to step out of Santa’s shadow. Prepared to be thrilled in a new, old-fashioned way.”
— Hank Schwaeble, Bram Stoker Award-winning author of Damnable, Diabolical and The Angel of the Abyss

“In The Dark Servant, Manochio spins a riveting tale of a community under siege by a grotesque, chain-clanking monster with cloven-hooves, a dry sense of wit, and a sadistic predilection for torture. As Christmas nears and a snowstorm paralyzes the town, the terrifying Krampus doesn’t just leave switches for the local bullies, bitches, and badasses, he beats the living (editor’s note: rhymes with skit) out of them! Manochio balances a very dark theme with crackling dialogue, fast-paced action, and an engaging, small-town setting.”
— Lucy Taylor, Bram Stoker Award-winning author of The Safety of Unknown Cities

“A fast-paced thrill-ride into an obscure but frightful Christmas legend. Could there be a dark side to Santa? And if so, what would he do to those kids who were naughty? Matt Manochio provides the nail-biting answer with The Dark Servant.”
— John Everson, Bram Stoker Award-winning author of Violet Eyes

“A high-octane blast of horror. A surefire hit for fans of monsters and gore.”
— Mario Acevedo, author of Werewolf Smackdown

Your board will be judged on the above PLUS your creativity and effort in the project! Send Erin at hookofabook@hotmail.com your Pinterest page to enter by Dec. 8. Of course you can continue to use it through the Holiday if you wish!
Prize: A "Santa Checked His List and I'm on the Naughty Side" package. This will include your choice of Krampus themed apparel (t-shirt or sweatshirt, men or women, visuals to come) and a signed paperback of the book.
There might be shipping limitations. Check back to tour page before entering if you live outside the U.S. for updated information.
Example:
http://www.pinterest.com/erinalmehairi/its-old-world-christmas/
And a board about Matt:
http://www.pinterest.com/erinalmehairi/the-dark-servant-matt-manochio/
Giveaway for Reviewers!
Anyone on the tour, or outside the tour, who reviews The Dark Servant on Amazon and GoodReads and sends their review link into Erin (Publicist for Matt Manochio) at hookofabook@hotmail.com, now through Dec. 31, 2014, will be entered to win a $25 Amazon gift card. 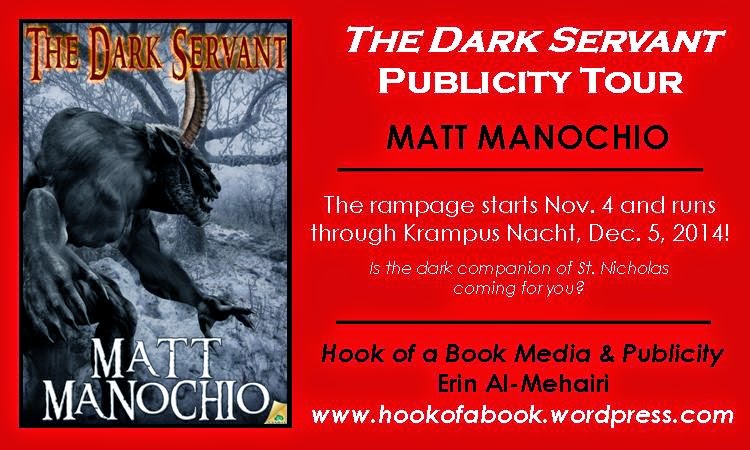 Posted by David Bernstein at 8:31 PM