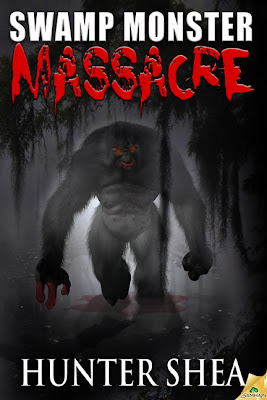 According to The Facts on File Encyclopedia, World Mythology and Legend, Bigfoot is defined as “the traditional wild man figure, named for the large footprints the creature purportedly leaves. Descriptions are always similar: he is large and has hairy, apelike features and an overpowering stench.”


I’ve been entranced by the concept of Bigfoot ever since Leonard Nimoy introduced him to me in my living room on an episode of In Search Of. I like to think that despite all our advances in science, there are still mysteries out there waiting to be discovered. And off all the beasts that roam within the realm of cryptozoology, I hope that our pal Sasquatch is the one that is real, out there, roaming the woods.


I say this even though the main character in my first book, Forest of Shadows, a full time devotee of the paranormal, claimed Bigfoot theory to be full of crap. I think I subconsciously did this so I could prove my own hero wrong some day. No one likes a know-it-all.


Writing a Bigfoot novel has always been a dream of mine. So, if I was going to tackle it, why not shine the light on his lesser known cousin, the Skunk Ape? Now, for those not in the know, the Skunk Ape is a Bigfoot typically found in Florida. He gets the name from his exceptionally ripe body odor. You’ll find a lot of Skunk Ape lore originating within the cloying swamps of the Everglades. Check out The Legend of Boggy Creek to get the drift. It’s a wonderfully terrible movie.


Now, what would happen if a band of accidental interlopers accidentally killed a Skunk Ape baby? Like humans, Skunk Apes probably have a tight knit familial unit. How would they react? And how would the humans respond to the impossible? I like to think it would go something like this….


An excerpt from Swamp Monster Massacre:


John felt the hammer blow to his back before he had a chance to turn around. It sounded like a herd of stampeding wildebeests .


He hit the shallow water face-first and got a mouth full of gunk from the bottom. When he exploded to the surface, he couldn’t help but scream.


Four hairy monsters, the smallest at just about seven feet, the largest over eight, stood side by side on the shore, bellowing with murderous intent. All had broad, muscular chests, and one sported a pair of drooping, furred breasts. The hair on their heads was long, like an 80’s glam band gone rogue. Their immense, talon-like hands hung low, almost to their knees. A small amount of bronze flesh was visible on their faces, but the rest of them just looked like bipedal wooly mammoths. And their eyes! Eight flaming eyes bore out from under all that hair and filth.


Liz was nowhere to be seen, but three of the skunk apes had hold of his wife. Tears ran down her face and she wailed, “John! Please, help me!”


A sharp crack came from behind him and he whipped around to see Rooster take a careful shot at the one that held Carol’s left arm. A jet of blood sprouted from its shoulder, but it didn’t let go.


Instead, it tightened its grip, bringing out a scream in Carol that didn’t seem humanly possible.


“It’s breaking my arm!” she shouted.


John fought the mire that tried to hold him in place. He was weeping and shouting and out of his mind with helpless anger and fear.


He was inches from shore when the beasts bent at the knees in a concerted effort and tugged. Carol came apart in three shredded hunks as easily as a cheap piñata. One of them held a portion that contained her right leg, part of her torso, neck, and worst of all, still-screaming head.”


John meant to empty every bullet he had in his gun, but it had been lost in the water.


Another shot rang out, biting off the trunk of a tree.


He heard someone shout, “John, get back!”


Carol’s eyes settled on his, and her shouting, and her pain, stopped. A final tear snaked down her cheek, and she was silent.


The skunk apes tossed her pieces into the water, beating at the ground with their massive hands and screeching, baring jagged, yellow teeth.

Posted by David Bernstein at 10:43 AM